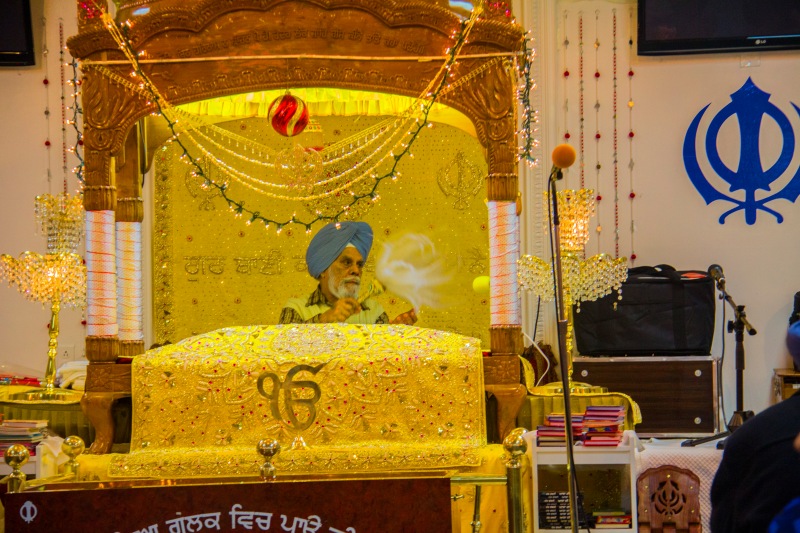 Sikhs in the New York

Ever since 9/11 things have changed for the worse for Sikhs here in the United States. That’s because the Sikh men tie their uncut hair in a turban and have unshaven beards, and so I presume. They have been faced with a barrage of violent acts against them. The latest one was the Sikh temple shootings in Wisconsin.  So, let us begin to ask ourselves as to why this is happening. Perhaps, some may be misinformed, a few misled, while there are those that just don’t care.

When we humans are in fear, and have unresolved insecurities, the lizard in us takes over. Like a festering boil ready to burst, it takes just one misguided soul, or should I say, ‘I just don’t give a damn,’ sort of an individual to wakeup, to only turn into a zombie, and in the process inspire many more to join their crusade. When our lower self takes over, our reasoning gets twisted, and we masterfully use all the tricks in the book to convince our conscience that we are doing the righteous thing, and the excuse some use is, that they did it in the name of God, Country, or they were not in their right mind that resulted in taking someone else’s life. The adrenalin rush for that single moment in time leads not only the people involved, but also the entire world into panic. The ones that think they are protecting us from the terrorist, they themselves have become one.

Sikhism was born to mend the ills of the religions that existed in mid 1400’s. Guru Nanak the founder of this religion studied both Islam and Hinduism and felt that the appreciation and worship of God is not by rituals, and also subjugating our fellow beings. He believed that we are all the same regardless of our status or abilities, we are the same in the eyes of God, and the same attitude should be applied in our response to all our fellow beings.

There were 10 Gurus that laid the foundation for Sikhism, and it was during the 10th Guru, Guru Gobind Singh that the 5 K’s were introduced. One of which is the turban to tie up the hair and unshaven beard began. Guru Gobind Singh believed that uncut hair is a symbol of acceptance of your form as God intended it to be.

When people do not take the time to even find out before they go out on a revengeful killing spry, it boggles the mind. Sikhs are from Punjab, India and not from any other country such as the Middle East, and I hope and pray that more people begin to make distinctions before taking drastic missteps.

I am visited a Gurudwara in Plainview, New York a few miles from where I live, the President of the temple had invited my family and I for Langar. This is when the meal is cooked and severed for anyone who attends the Gurudwara service. The Langar provides for everyone, even the poor and needy a place to get a lovely meal.

The Sikh Gurudwara in Plainview is a simple, yet a very serene place of worship. There a certain requirements all have to follow:

• Everybody must cover his or her head. A good example is a do-rag.

I asked the Sikh elders to explain the religion in a nutshell, and this is how they put it.

Sikhism gives equal rights regardless of your gender, financial status, and they don’t believe in the caste system, equality to all.

All attending sit on the floor. Typically the women sit to one side and the men on the other. The Gurudwara seemed quite orderly compared to a Hindu temple, the devotees come and go as they please, unlike a church where the congregations come and normally never leave till the end of the service. They have one of the learned men read a passage from their holy scriptures and explain it. The scriptures have been handed down to them by their 10 Gurus, After the reading there is the singing of hymns. Since the readings were in Punjabi I really couldn’t understand, but the hymns were sung very well, all sung in a Hindustani music scale and style. There were 3 wonderful singers that put on a show. There were 2 on the Indian harmonium and 1 on the tabala (the Indian percussion). The feeling of devotion came through, this part you didn’t need to know Punjabi, the music was so sublime I just had to close my eyes and drift away joining them in devotion.

After the worship is over they give every one a spoonful of prasadam placed in your palm of your hand. A sweet made from semolina, sugar and pure ghee. My…my, it was out of this world, delicious is not sufficient to describe it. After this, all are invited to share in the meal that is provided in the basement of the Gurudwara. The food is vegetarian, delicious and wholesome. We were served chapattis, rice and two curries, one was a red kidney bean curry called rajma, could have been a little thicker, any how very tasty. The other curry served was matar-paneer, which is peas-and Indian cheese. It was perfect. The meal finished off with an Indian sweet called kheer, made with milk rice, sugar and ghee (Indian clarified butter).

I was told the kitchen is open 24 hours, and anyone could come and get a meal. The Sikhs have big heart, so if you are broke and starving, and need a good meal anywhere there is a Gurudwara you will be welcomed to enter. I don’t know if all Gurudwara’s are open 24/7, you can call and find out in your area. I’m quite sure that there centers all over the world that follow similar formalities.

The Sikhs come from all walks of life, from the Prime Minister of India to an ordinary citizen. They have a dignity of labor, and do any sort of work with a sense of pride and dignity, with an understanding that any job ends up being a service for the common good. The community is a very tightly knitted community; they are very helpful to each other, and to others even outside their community. I have yet to see a Sikh on the street begging. They have generous hearts and genuinely give others a helping hand.  One should have a personal experience to understand what I’m saying.

Rational minds would wonder, why do people take drastic steps to go so far as to take innocent lives. Don’t they realize we all have to face our own demons, all our actions show up around the bend, we may seem to think that turning the corner will be a new beginning, but the past mysteriously shows up and we have to face it.

My appeal to refrain from violence to all may be like a drop in all the oceans combined, but sometimes it just takes a straw to break the camels back.

This is where the the Sikh Scriptures are placed.

An elder reading the scriptures

People listening to the scriptures

Men by the Sikh holy scriptures and men singing

3 Sikh men putting on a fabulous show of devotional songs 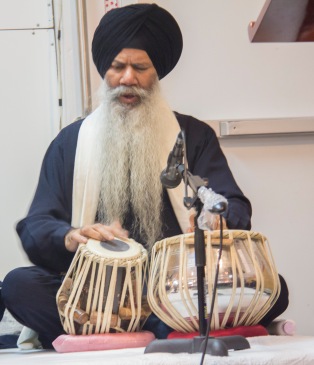 Sikh man on the harmonium

The other Sikh man harmonium

A family singing a Sikh hymns 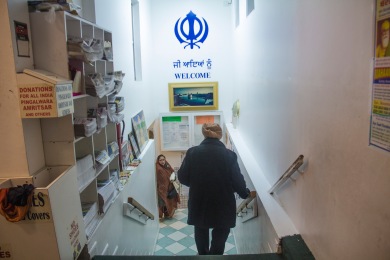 Man going downstairs for the Langar

15 Dec This entry was published on December 15, 2013 at 10:41 am. It’s filed under Uncategorized, Weekly Writing Challenge and tagged dpchallenge, Gurdwara, Guru Gobind Singh, Guru Nanak, Postaday, Sikh, Sikhism. Bookmark the permalink. Follow any comments here with the RSS feed for this post.